Taipei Veterans General Hospital (TVGH) yesterday said that it had, for the first time in Taiwan, used concomitant Impella support (ECPELLA) to successfully save a patient with acute heart failure.

A 34-year-old woman was diagnosed with a severe intra-abdominal infection in her 21st week of pregnancy. Labor was induced, but she was unable to keep the child. She developed septic shock, as well as heart and multiple organ failure, and was put on a ventilator and extracorporeal membrane oxygenation (ECMO) for life support.

Chen I-ming (陳沂名), a cardiovascular surgeon at the hospital, said it is rare for a serious infection to cause heart failure. 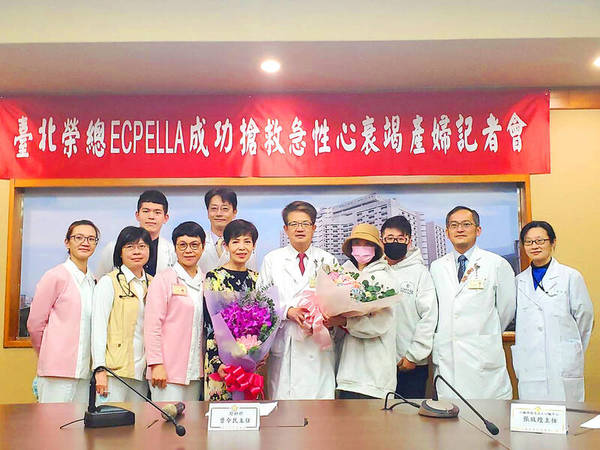 The woman’s heart function did not improve much after using ECMO and an intra-aortic balloon pump for three days, Chen said, adding that her heart was only functioning at 17 percent.

They needed to consider other options to save her, as continued use of ECMO in her condition could have caused pulmonary edema and thrombosis, he said.

Open-heart surgery would be needed to implant a ventricular assist device, but the surgery would last for many hours, leaving a large wound that would take a long time to heal, Chen said, adding that heart transplant surgery was also considered, but it might have taken too long for a heart to become available.

Luckily, thanks to a corporate donation, they were able to perform an ECPELLA procedure, and implant an Impella device — a catheter-based miniaturized ventricular assist device — into the woman’s heart through a small incision in an artery in her leg, he said.

The procedure only took about an hour, but the assistance of three cardiovascular surgeons and three anesthesiologists was needed, Chen said.

The woman’s heart function gradually improved, he said, adding that she was taken off ECMO after three days, the ventricular assist device was removed after six days and she was discharged after 22 days.

Chang Shiao-hwang (張效煌), a cardiovascular surgeon and director of the hospital’s Heart Transplant and Artificial Heart Center, said ECMO has been used for two to three decades, but ECPELLA is an advanced breakthrough that has just been introduced to Taiwan, and might be able to replace the need for a heart transplant in many cases, avoiding open heart and transplant surgery.

Chen said the one-year survival rate of people who undergo the ECPELLA procedure is about 92 or 93 percent.

It could become a new option for people with severe heart failure, there is a reduced risk of side effects compared with ECMO, but the downside is that it is not covered by the National Health Insurance and the medical consumables cost up to about NT$1 million (US$32,614), Chen said.