OVERSEAS PATIENT: A Spanish woman last year arrived in Taiwan to get treatment for a malignant brain stem tumor, which was reduced to 1.06cm

More than 120 people with brain or head and neck cancer have been treated with a boron neutron capture therapy developed by National Tsing Hua University, a team of researchers said yesterday.

The nation’s only research nuclear reactor was owned by the university, which converted it into a device for clinical therapy and established the Boron Neutron Capture Therapy Center.

The conversion was not directly related to the nation’s change in nuclear power policy, center director Lee Min (李敏) said, adding that the university’s College of Nuclear Science had been exploring more applications for radiation. 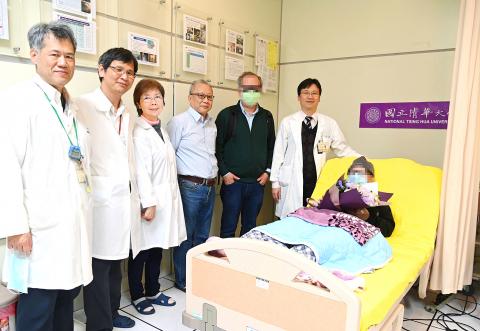 In the 1990s, the college sent personnel to learn the therapeutic technique at the Massachusetts Institute of Technology, where the first clinical trials were conducted, he said, adding that only Taiwan and Japan have continued to develop and use it in clinical applications.

In the therapy, drugs containing boron — a nonmetal element used in nuclear reaction — are injected in cancer patients and accumulate in tumors, which are then irradiated by a neutron beam generated by the reactor, Institute of Nuclear Engineering and Science professor Chou Fong-in (周鳳英) said.

High-energy particles produced through nuclear reactions kill tumor cells without affecting normal cells, making the therapy suitable for combating tumors that are widespread and harder to surgically remove, she said.

Through a connection between the center and the International Society for Neutron Capture Therapy, a Spanish woman in October last year arrived in Taiwan for treatment of a malignant tumor in her brain stem, the team said, withholding the woman’s name to protect her privacy.

After receiving an examination at the hospital, the woman last month visited the center to receive the therapy, which reduced her tumor from 3.51cm to 1.06cm, it said.

As her second radiation session was scheduled for Feb. 14, the team helped the woman mark Valentine’s Day, with her husband — who is a physician — preparing a bouquet to celebrate her recovery, it added.

The woman has returned to Spain for follow-up observation, Lee said.

As it is a relatively new therapy, cancer patients can only receive it after careful evaluations by doctors and personnel from the center, and as well as with case-by-case approval from the Food and Drug Administration, he said.

Since the center started working with physicians at the hospital in 2010, more than 120 patients have received the therapy, he added.

The university is also working with the Taoyuan City Government on a planned affiliated hospital at the Taoyuan Aerotropolis, Lee said, adding that he hopes the therapy would benefit more patients.