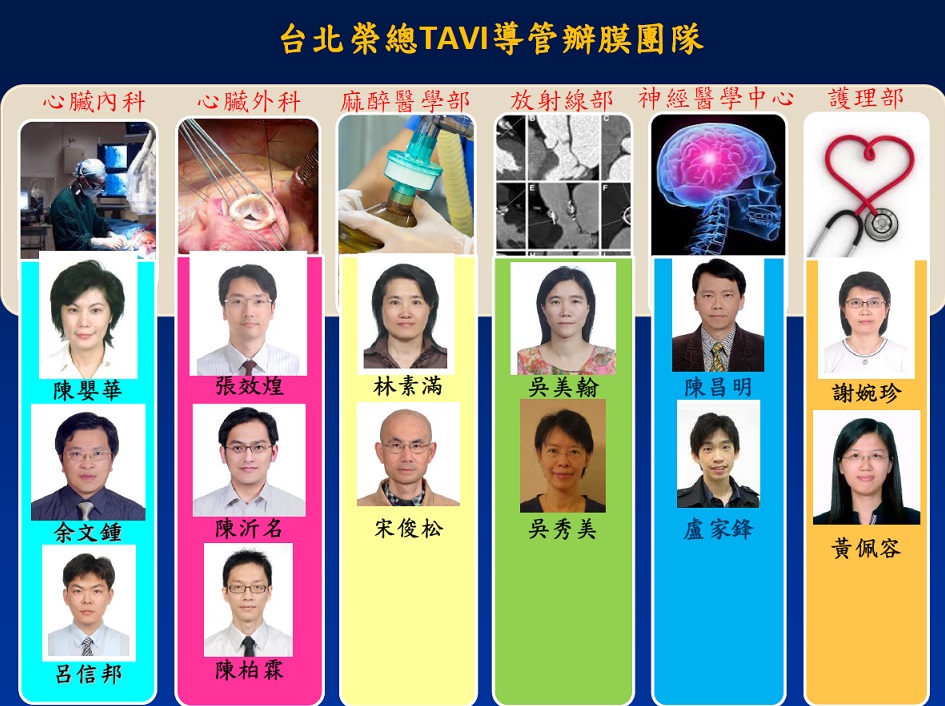 The number of cases of aortic stenosis has risen along with the increasing elderly population around the world. Among people aged 75 years or older, 3.4% of them have severe aortic stenosis. If symptoms appear, the standard treatment is surgical aortic valve replacement. However, over 30% of patients are not able to undergo surgery due to their advanced age or combination of other diseases. Once the symptoms of severe aortic stenosis appear (chest pain, syncope, and heart failure), the death rate for patients receiving medication and not undergoing surgery reaches up to 50% within one year. The five-year survival rate is almost 0%. So, the mortality risk is not less than cancer. Transcatheter aortic valve implantation (TAVI) is a less invasive approach which offers a new alternative for those patients deemed inoperable or of high surgical risk.

Taipei Veterans General Hospital was a piorneering hospital in Taiwan to perform TAVI procedure. The first case in VGH was performed in 2010. Professionals in the fields of cardiology, cardiac surgery, anesthesia, radiology, and neurology have joined together to form the specialized TAVI team. As of today, a total of 150 operations have been performed. The team has also pioneered non-intubated procedure with local anesthesia and use of the percutaneous vascular closure device in 2013 to minimize operative complications. The 3M principle ─ multidisciplinary, multimodality, a minimalist approach ─ was applied successfully during procedures, establishing a model for interdisciplinary team cooperation.

Taipei Veterans General Hospital was the forerunner in Taiwan to perform TAVI procedure and its multidisciplinary team was the few team in Taiwan to receive IRB approval from the Department of Health to perform TAVI procedure. The TAVI team pioneered non-intubated procedure with local anesthesia in 2013. A total of 138 procedure has been completed. Despite our patients had a predicted mortality rate according to EuroSCORE reaching 20 %, we achieved the lower complication rate and mortality rate than most countries in the world. These outstanding results have made our team the envy of the world:

The outstanding results of the Taipei Veterans General Hospital’s TAVI team were published in high-impact factor magazines including the European Heart Journal (SCI IF= 15.064). The team was invited to perform live demonstrations for the Annual Convention and Scientific Session of the Taiwan Society of Cardiology in 2014 and for the live course of Taiwan Society of Cardiovascular Interventions in 2017. TAVI has been selected as one of the four top specialties of Taipei Veterans General Hospital and media reports on the team have appeared in Business Weekly magazine, TVBS, and other media.

At present, under the leadership of Dr. Chen, Ying-Hua and Dr. Zhang, Xiao-Huang, our TAVI team has sixteen cardiac surgeons and physicians who meet the requirements of the Bureau of Central Health Insurance, Department of Ministry of Health and Welfare. Not only are Dr. Chen and Dr. Zhang the few qualified proctors for Metronic devices in our country, but Dr. Zhang is also the only cardiovascular surgeon proctor for Metronic in Asia. Both of them are also qualified proctor free doctors for Edward devices. Looking forward to the future, our TAVI team will be able to provide more and more high-quality services.